Dropbox is a popular file syncing tool that offers great value for businesses. With it, you don't need to email files back and forth, and employees in the same department can easily access shared resources.

But one of the drawbacks of Dropbox is that keeping all those files on your PC takes up space. To combat this, Dropbox has introduced a new feature called Smart Sync. It claims that it will help you keep unimportant files off your hard drive, saving space.

Let's see what Smart Sync does and how it compares to existing tools.

What Is Smart Sync?

Dropbox's new Smart Sync feature allows you to browse and access all the files in your Dropbox without them taking up space on your hard drive. This allows you to keep all folders that others have shared with you handy without the storage costs.

To properly understand Smart Sync, we need to review how Dropbox sync files without it.

With a Dropbox for Business account, you likely have access to a lot of folders that you don't always need. By default, when you sign into the Dropbox app on your computer, it syncs all available folders to your local machine.

This means that you can access the most recent version of any file easily, but all those files take up a lot of hard drive space. With tons of files, you could run low on space and negatively affect your computer's performance.

To combat this, Dropbox has long offered a feature called Selective Sync. This lets you choose what files and folders you want to sync from Dropbox to your PC. That way, if you don't access most of your company's Dropbox often, you can remove those files from your computer and save space. 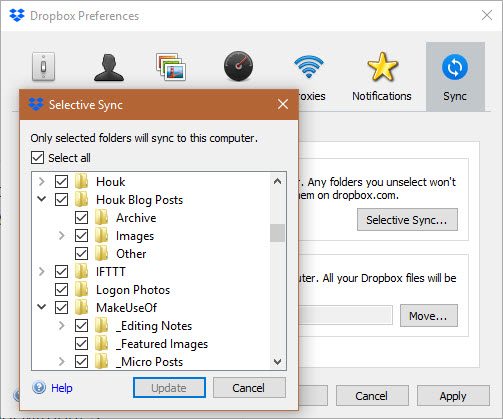 The problem with this is that if you don't sync a folder or file to your computer, you won't see it or be able to easily access it. You'd have to visit the Selective Sync settings and tell the new folder to sync, or visit the Dropbox website to access it.

Both are inconvenient, which is why Smart Sync is a better way.

Dropbox's Smart Sync allows you to see and preview all files in your Dropbox, including any shared with you by others. They all appear inside the Dropbox folder on your PC, but they don't actually download and take up space unless you open them.

Thus, Smart Sync provides a seamless experience. Files that you've downloaded appear alongside those that are only in Dropbox. When you want to open a file that's online-only, Dropbox downloads and syncs it automatically.

Even if you don't need to edit, Smart Sync still lets you move, rename, and preview online-only files.

Smart Sync is a great innovation for Dropbox, as it removes two big pain points of the service. You no longer have to worry about excess files taking up too much hard drive space, because you can de-sync them anytime. And you'll always know what files are in your Dropbox, even if they're not synced to your PC.

Dropbox has integrated Smart Sync into its apps for Windows and Mac. If you use Dropbox in your business, you likely already have access to this feature. Check out our guide to using Smart Sync for guided instructions on how to use it.