4 Chrome Browser Alternatives That Are Worth a Try

Google Chrome is by far the world's most popular browser, with nearly a 70% share of the desktop browser market at the time of writing. And while Chrome is definitely a fine browser, it's not perfect.

Chrome is known to consume a lot of memory, which can be a burden on older machines. Even more concerning is Google's pervasive surveillance, which is built into its browser.

Thankfully, Google's browser is far from your only option. Let's take a look at some alternatives and their coolest features that are worth a try. 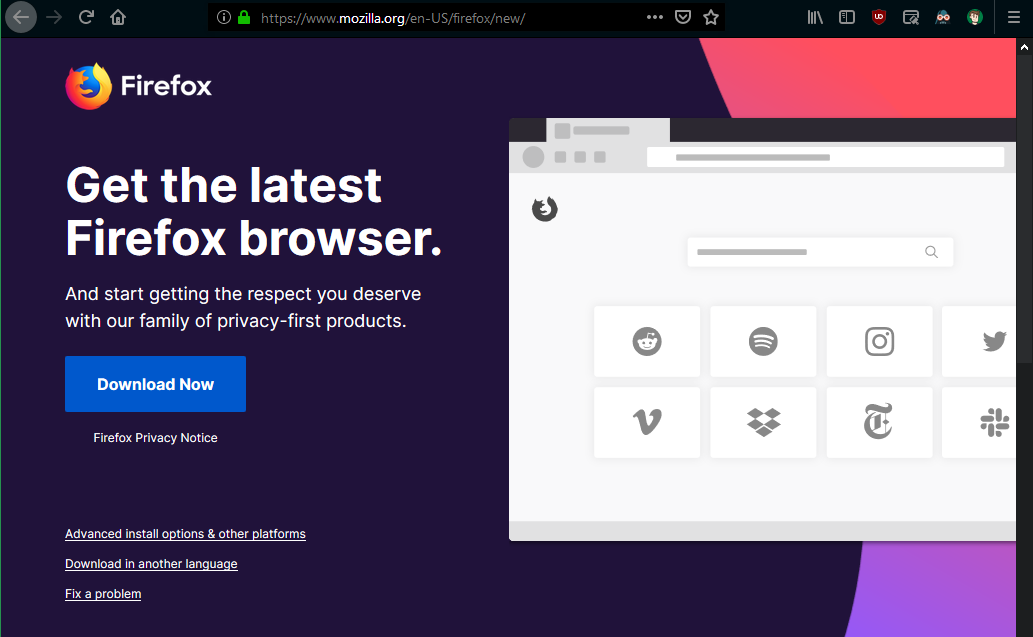 Firefox is a veteran browser. It first launched in 2004 and became a powerful competitor to the then-dominant Internet Explorer. Nowadays it's not nearly as popular as Chrome, but it's still worth keeping around.

For a long time, many people loved Firefox for its library of add-ons. The revised Firefox Quantum (released in November 2017) rendered many of these extinct, but you'll still find some great Firefox extensions that aren't available for Chrome.

Firefox is also a good choice for those who like to lightly customize. You can drag various toolbar and menu elements around the browser window to get it looking just like you prefer.

Finally, Mozilla, the developer behind Firefox, is committed to internet privacy. The browser is open source, meaning that anyone can look at the code and improve it if they want. Firefox doesn't collect as much data as Chrome, so you can rest easier knowing you aren't giving Google a ton of data.

Firefox and Chrome are fairly similar to use, so there's not much of a learning curve. This makes it a good choice if you're nervous about switching. 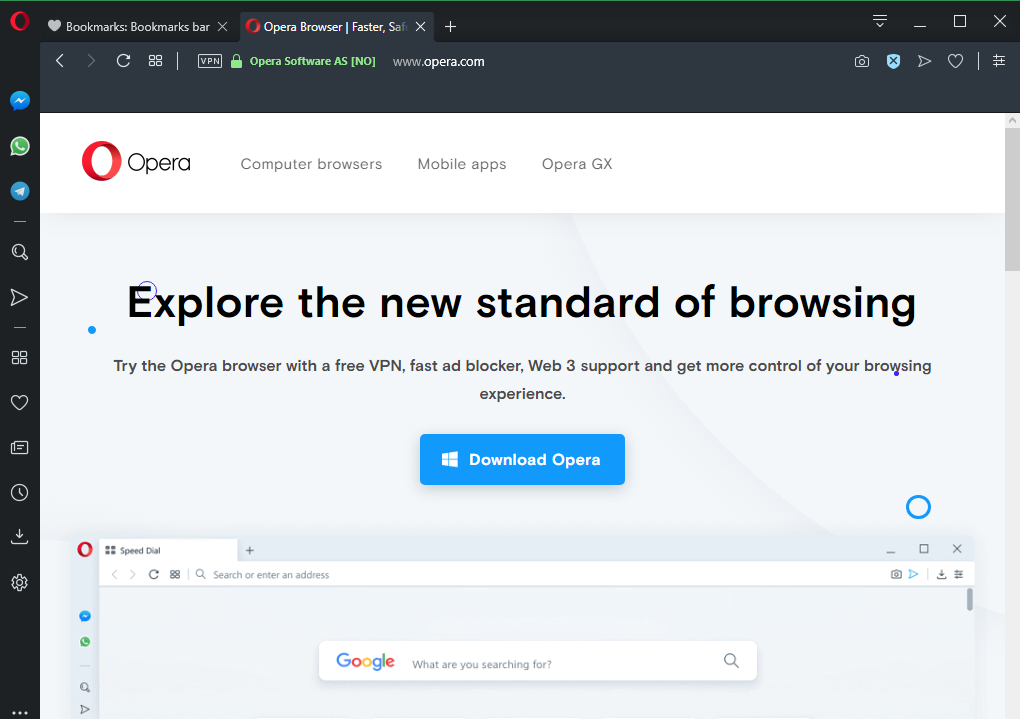 You may not have heard of Opera, but it's another browser that's been around for several decades. If you're looking for something a bit different out of your browser, it might be the one for you.

Compared to Chrome and Firefox, Opera packs some unique features and user interface elements. On its left sidebar, you can access Facebook Messenger, WhatsApp, and Telegram chats without having to open them in a new tab or download the desktop app.

Opera also features a built-in VPN that can protect your browsing in a pinch. If you're on a laptop, the battery saver mode claims it can let you browse up to 50% longer.

Diving into Opera's settings shows that it has a lot more to offer. You can enable mouse gestures that let you go back and forward, close tabs, and open new links with one quick motion. It features a handy popup bubble when selecting text, which allows you to easily search for that phrase or even convert units on the fly.

If Firefox bores you, give Opera a look. It's an underrated option, yet based on Chromium (the same source project as Chrome) so it doesn't feel unfamiliar. 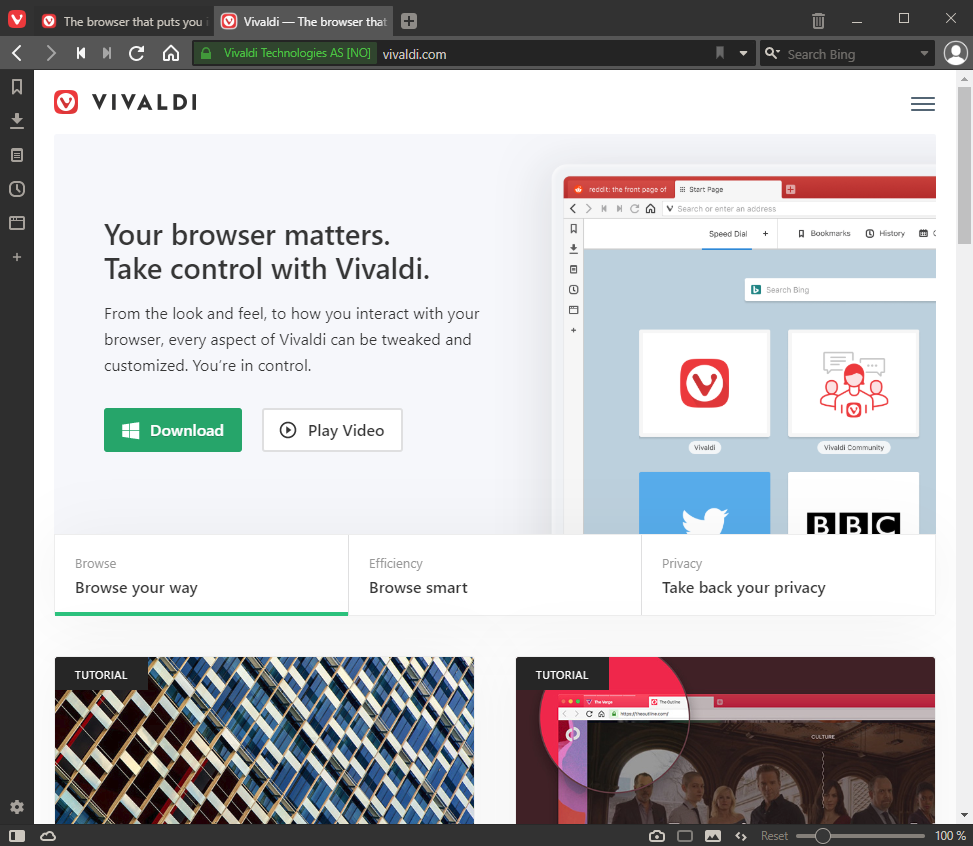 Vivaldi is made for those who love customization. It goes even further than Opera in letting you tweak nearly every aspect. You'll find mouse gestures and custom keyboard shortcuts, plus you have a wealth of options for how the address bar and tabs behave.

Set up your own custom theme if you don't like the look of the default ones---you can even schedule it to change with the sun rising and setting. A built-in notes panel lets you jot down extra info while you're on a webpage. You can also grab a screenshot of any webpage using the built-in utility.

Dig around Vivaldi, and you'll find more little touches like these. It's definitely a feature-rich browser. 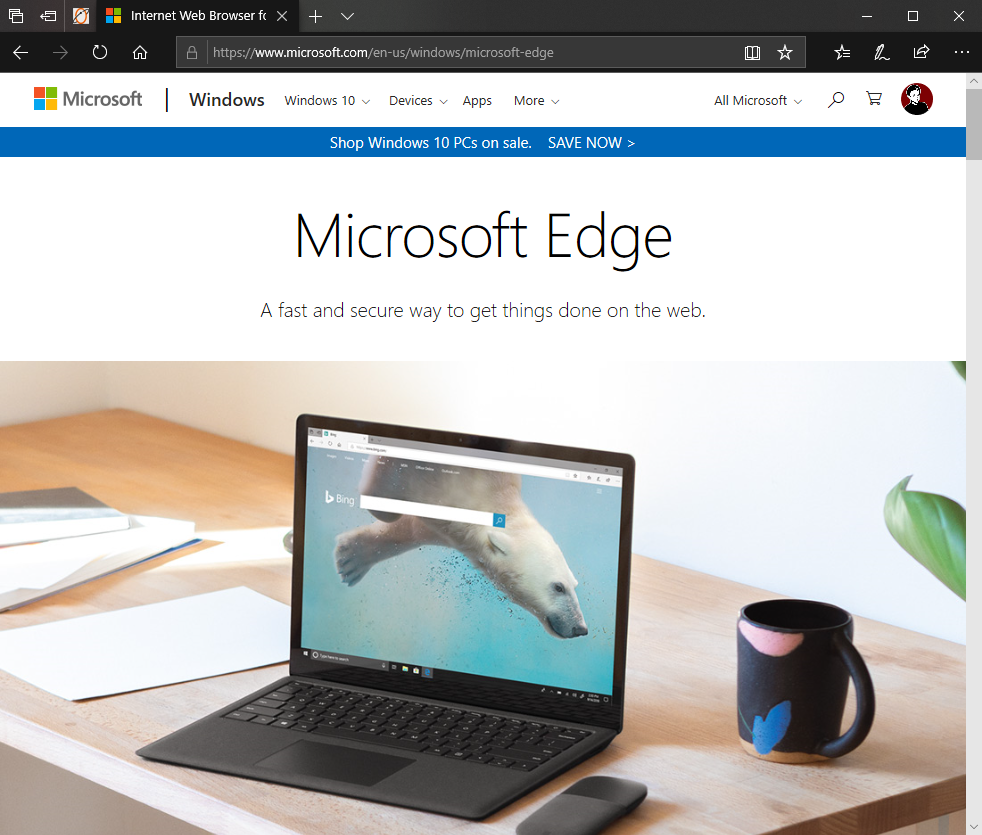 Internet Explorer has put a bad taste in many people's mouths about the default Windows browser, but Edge isn't too bad. It pales in many ways compared to other choices, but it's suitable for light use and even has a few neat features.

Edge includes an annotation feature, which lets you mark up webpages and take a screenshot of them to share with someone. It also has a neat utility called Set Aside, where you can save certain tabs for later and recall them when you're ready to read them. If you have a touchscreen device, Edge switches to larger buttons and enables touch shortcuts when using your computer in tablet mode.

Notably, Microsoft has announced that Edge will soon become a Chromium-powered browser. The company is giving up on Edge's proprietary rendering engine and will essentially become a wrapper around the technology that makes Chrome work. This is similar to how Opera works nowadays.

Because of this engine change, Edge will work on Windows 7 and 8, plus macOS. We'll see if this increased availability results in greater popularity.

For now, it's still a bit too limited to act as your main browser, but if you've never given Edge a try before, you might be pleasantly surprised. You might like it even more after Microsoft makes the changes it has planned.

What Browser Will You Try Next?

We've looked at four browser alternatives to Google Chrome. Give them a look if you're tired of Google's intrusions into your privacy or just want to test something new. Chances are you'll find one you really enjoy using.