How to Deal With Phone Call and Text Message Spam

While email spam is the most common form of unwanted communication, it's far from the only type most people deal with. You've probably received a good share of junk text messages and annoying phone calls on your phone.

If you're not sure what to do about text message spam and unwanted phone calls, we'll show you the ways to fight back.

How to Fight Phone Call Spam

Obnoxious telemarketers and robocalls get to everyone at some point. But you don't have to put up with this.

In general, the best way to prevent unwanted phone calls is to keep your number as private as possible. Be careful where you enter it online and how often you provide it to retailers. Some companies are allowed to share your contact info with marketing affiliates, so giving your number to just a few entities can quickly spread to more.

If you often need to provide a phone number and don't want to give out your real one, consider signing up for Google Voice. It's a free service connected to your Google account that allows you to get a new, fully functional phone number. You can give that number out freely while keeping your main number private.

You should also place your number on the National Do Not Call Registry. Doing this tells legitimate companies that you do not want to be contacted with sales pitches. 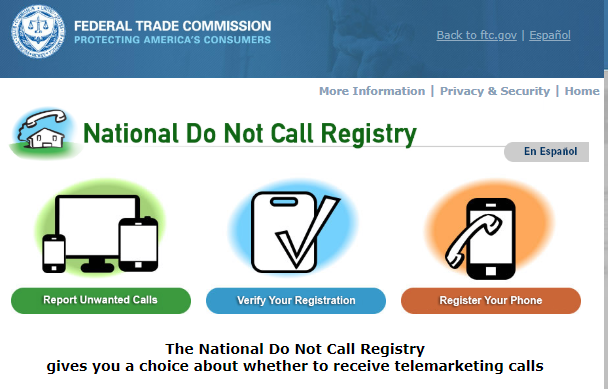 It doesn't prevent everything, as political calls, surveys, and calls about charitable organizations are still allowed. But it's a good first step. After your number has been on the list for a month, you can report unwanted calls that still come through to the FTC.

If you use an iPhone, you can use a built-in function to block unwanted callers. Open the Phone app and go to the Recents tab at the bottom.

Here, tap the i icon to the right of the number you want to block. Scroll to the bottom of the resulting contact page and tap Block this Caller. Confirm your choice in the pop-up dialog, and you'll have them successfully blocked. 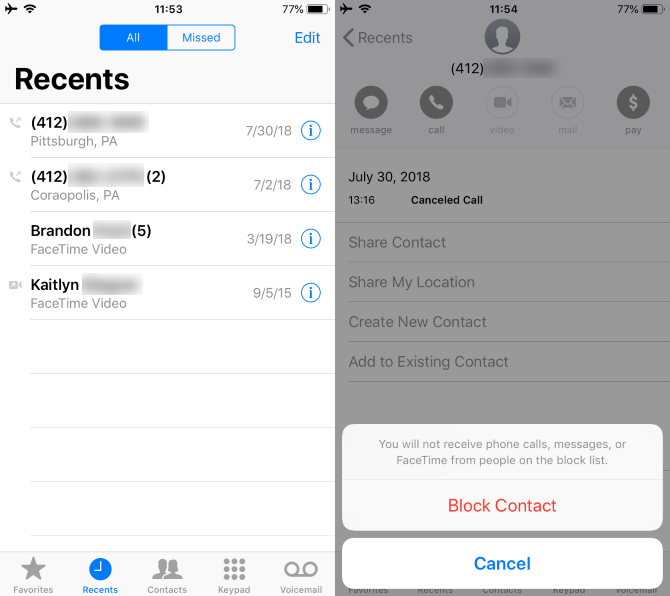 To edit your block list, go to Settings > Phone > Blocked Contacts. You can remove people from the list or add new contacts to it.

iOS 13 introduced a new feature that automatically blocks all calls from unknown numbers. This means that if someone isn't in your contact list, their call goes immediately to voicemail. To use it, head to Settings > Phone. Here, toggle the Silence Unknown Callers option on.

Once enabled, calls from unknown numbers will be silenced and sent to voicemail, though they will appear in your Recents list. Apple notes that calls from those you're recently called and Siri Suggestions will still ring.

This is handy in situations where you, say, call a salon to make a hair appointment and don't get a response, but they call back five minutes later. Siri Suggestions will detect numbers from your emails.

While useful, you should be careful with this option. Many legitimate calls do come from numbers you might not have in your phone, such as doctor's offices, company customer support, or a loved one using a friend's phone in an emergency. You might not want to enable it if you expect legitimate calls from unknown numbers regularly.

If you need a different solution, take a look at dedicated apps that block calls. These automatically block known spammers so you don't have to pick them out individually or block all unknown numbers.

Truecaller is a popular all-around choice, though you should be aware that it also acts as a number lookup service and thus uploads your number to its database when you use it. RoboKiller is another highly-rated app, but the service isn't free.

Depending on what Android phone you have, the built-in options may be slightly different. But most manufacturers provide a tool similar to the iPhone's call blocking feature.

Open the Phone app and switch to the Recents tab. If you're recently been contacted by an unwanted caller, you can long-press on their entry and tap Block/report spam.

To review your block list, tap the three-dot menu button in the top-right and choose Settings. On the resulting page, tab Blocked numbers and you can see all the numbers you've blocked. Tap the X to remove one, or choose Add a number if needed. Some versions of Android also allow you to block all unknown numbers from this menu, similar to the iOS 13 feature. 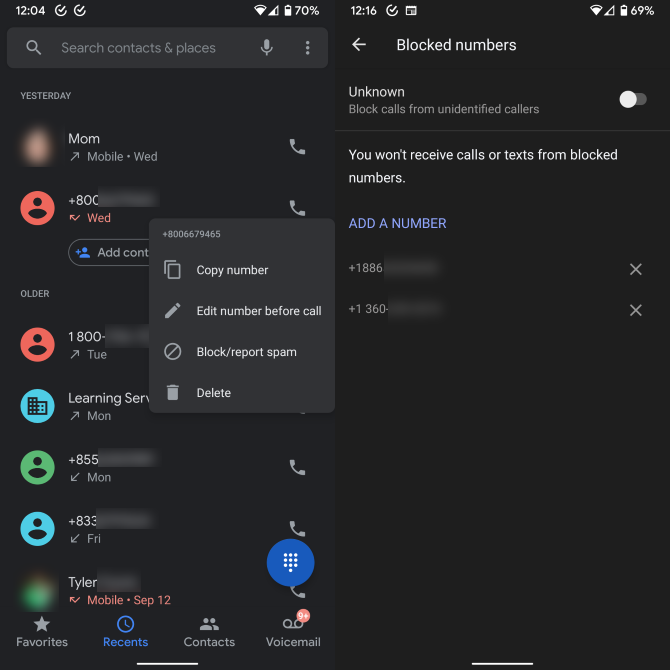 For a heavier solution, you'll find Android versions of the same automated call-blocking apps available on iOS. Check out Truecaller for Android first; RoboKiller for Android is also available if you don't mind paying.

How to Deal With Text Message Spam

In the United States, text message spam isn't usually as big of an issue as unwanted calls. However, if you often get unwanted messages, you can put a stop to those. The same tips above about being cautious with your number and considering Google Voice apply to text messages, too.

While there's no Do Not Call list equivalent for text messages, you can report unwanted SMS in a few ways. You can file a complaint on the FTC Complaint Assistant website and the FCC's Consumer Complaint Center.

In addition, nearly all mobile carriers support forwarding the message to 7726 (which spells SPAM on a phone keypad) to report it.

On an iPhone, long-press a message and tap More in the resulting window. Tap the arrow in the bottom-right corner to forward it as a new message, then enter 7726 at the top to send it to that service. 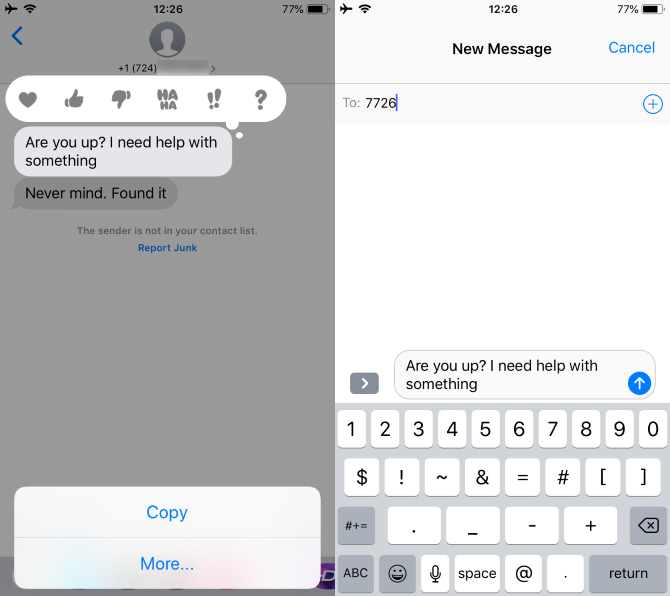 Forwarding on Android differs based on your phone and SMS app. In general, you can long-press on a message and tap Forward to send it to 7726.

In addition to blocking calls, adding a contact to your block list on iOS prevents them from sending you messages and FaceTime. You can block a contact from the Messages app in a similar way to the Phone app.

This will bring you to their contact page. Now scroll down to the bottom and tap Block this Caller to prevent them from contacting you. 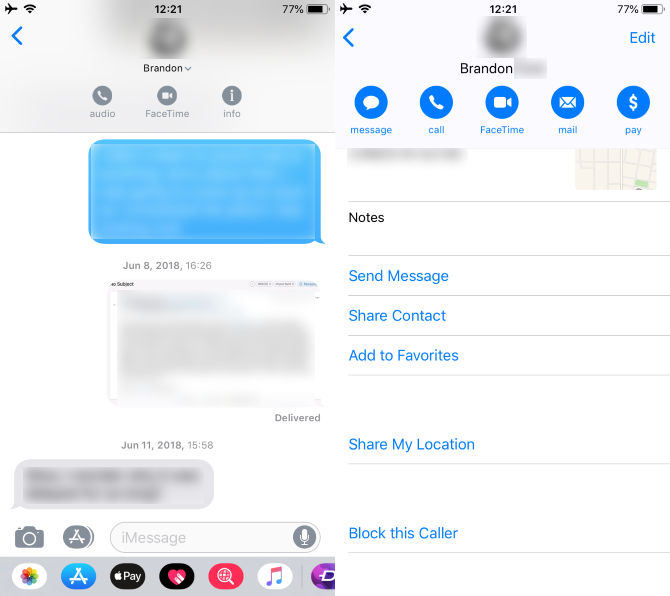 In addition to this, if someone who's not in your contacts sends you an iMessage, you'll see a message at the bottom allowing you to Report Junk. This lets you send a report to Apple about unwanted messages.

For automated blocking, you can visit Settings > Messages and enable Filter Unknown Senders (which may appear under the Unknown & Spam section). This will disable message notifications for people not in your contacts and put them in a separate list.

Truecaller, mentioned earlier, can also block SMS spam. If you have a compatible SMS blocker app installed, you'll see an Unknown & Spam field in this Settings menu. Turn on the slider for that app to use its custom spam filter. 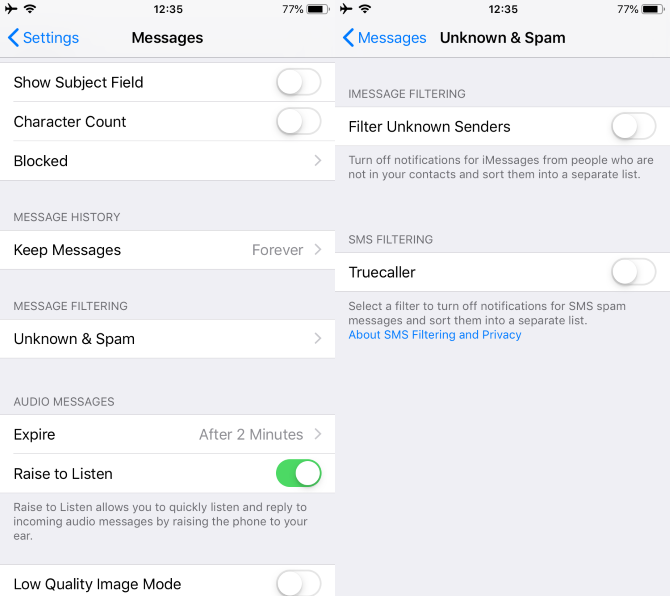 The method to block spam SMS on Android depends on the app you use. Most have a similar block feature that you can usually access by long-pressing on a conversation and tapping Block.

In Pulse SMS, seen below, you need to slide out the left menu and select Blacklist. Enter a number or phrase you want to block, and the app will stop messages with that content from coming through. You can also tap the three-dot menu in a conversation and choose Blacklist contact. 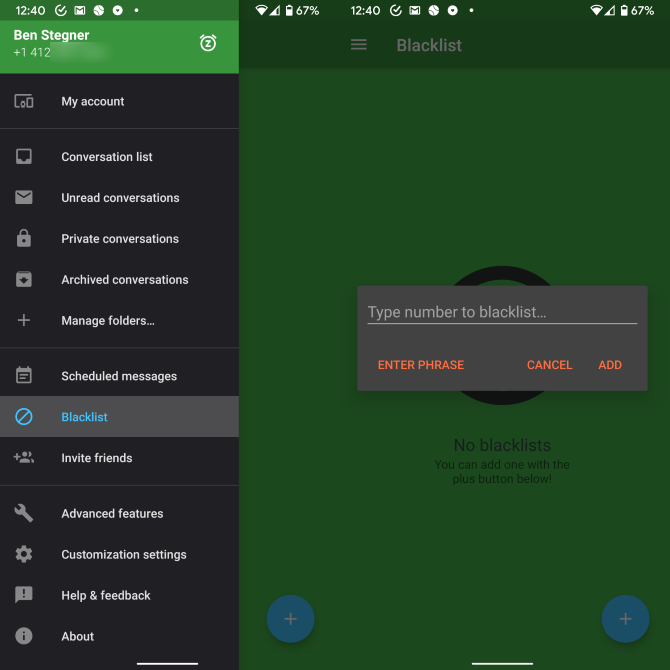 Like on iOS, Truecaller handles blocking SMS spam as well as calls. This makes it a great all-in-one solution for stopping unwanted communication.

We've looked at how to stop obnoxious messages, whether they come via calls or texts. Hopefully you don't have to deal with them often, but now you know how to fight back if you receive any unwanted messages. Both Android and iOS come equipped with plenty of tools for the job.

Take a look at how to fight junk email if you receive a lot of that, too.