As you probably know, there are a variety of solutions for remotely connecting to and accessing other computers from your own. These come in handy when you need to access resources on another network (such as your workplace) or control another computer without being physically present.

Below, we offer a quick comparison of three remote access solutions: a VPN, RDP, and third-party solutions like LogMeIn. Let's see what each offers and how to choose what's best for you.

A VPN, or Virtual Private Network, is a secure tunnel connection from your computer to another private network. It allows you to secure your browsing over the public internet and access resources on other networks as if you were there.

In a business setting, a work VPN typically allows you to connect to your company's network no matter where you are. Once you tunnel in with your VPN, you can access resources on the server, databases, intranet websites, and similar items that won't work from your home network.

A VPN uses encryption to protect the content of the data while it travels across the internet.

VPN connections that operate this way require a login with a username and password. We also advocate for enabling two-factor authentication on this connection, since it provides privileged access to your company's network.

A VPN doesn't directly allow you to control the mouse and keyboard on another computer. Thus, if you need to run specific apps on a remote computer, it's not the right choice. Depending on the network, connecting to a VPN can also slow your connection speed.

However, a VPN is great for letting you access company network resources anywhere. If you only need to grab a file from a server occasionally or just want to secure your browsing on public networks, a VPN will work well. 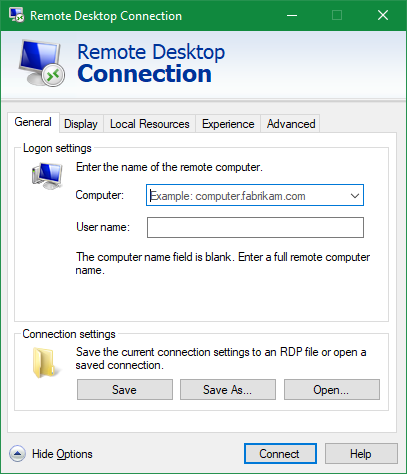 RDP, which stands for Remote Desktop Protocol, is a Microsoft protocol for establishing connections to other machines. Unlike a VPN, it allows you to fully control the target computer.

Remote Desktop Connection is Microsoft's official software for Remote Desktop. It's been included in Windows for some time in Professional and above editions. Once you've enabled Remote Desktop access at Settings > System > Remote Desktop, you can connect to the computer from another machine using its name or IP address.

You can use a VPN in conjunction with Remote Desktop to access a computer in the office just as if you were sitting there.

RDP is an easy remote desktop solution, and isn't limited to just Windows. Microsoft provides RDP apps for macOS, iOS, and Android, so you can connect to your Windows machines from other devices.

If your company uses a Remote Desktop Server, previously called a Terminal Server, you can use RDP to access this. Some setups will use RDP as the only way employees work and thus have a similar experience no matter where they are located.

Pros and Cons of RDP

Using RDP is best for accessing large local files that would otherwise take a long time to download over just a VPN.

However, RDP is less than ideal for working with images or video because of the way it sends screenshots back to the device instead of downloading the whole file for local playback.

If neither of the above categories work for you, you should look at one of the many third-party remote access tools available. These allow you to connect to any computer from another machine, even on other networks.

Most are cross-platform, removing any OS limitations. Often, it's as simple as installing the app on both computers, configuring a few options, and connecting.

Examples of this software include TeamViewer and LogMeIn, though you'll find plenty of other options. TeamViewer is free for personal use, while LogMeIn charges based on how many users you have.

The major pro to third-party apps like LogMeIn is their ease of use. It doesn't matter which platforms you use on the target or controlling computer, as apps are available for pretty much everything.

If you find Remote Desktop too confusing and just need something simple for personal use, TeamViewer is a great solution. It doesn't require any of the potential security risks of exposing Remote Desktop to the entire internet.

However, third-party apps aren't perfect. If you need them for commercial use and your company doesn't already have a subscription, the plans are quite expensive. Spending time to create a secure environment for Remote Desktop could be worth the money saved.

Additionally, they require you trusting third-party software with credentials and potentially sensitive material on your screen. Most reputable tools have proper security in place for this, but it's still a risk compared to an in-house solution where you control everything.

Which Remote Desktop Solution Will You Use?

We've quickly looked at three remote access solutions. Which is best for you comes down to your needs. In summary:

If you're working remotely because of the virus outbreak, have a look at our business remote access checklist for more considerations.