What You Should Know About Computers and Heat

Just like your body can become overheated, a computer can overheat as well. And while computers are built to withstand a high level of heat, it's still possible for them to become too hot.

Let's look at the basics of how heat affects computers, including normal operating temperatures and how to keep your system cool.

Chances are that you've heard the fan of your computer working hard---perhaps you've even felt a computer that's warm to the touch before. But have you ever wondered why computers generate this amount of heat?

Essentially, the heat comes from the electricity working inside the computer. As it flows through the various circuits and resistors inside your machine, some of that energy is "lost" and becomes heat. It's similar to a light bulb, where current runs through a wire and gets hot, glowing from the heat. As expected, a lightbulb is hot to the touch after you've had it on for a while.

A computer has lots of resistance packed into a small space, meaning that it generates heat quickly. Typically, the computer component that gets the hottest is the processor (CPU). As the "brain" of your computer, the CPU processes millions of instructions per second, which takes a lot of power.

As you perform more intensive tasks, like rendering video, the CPU has to work harder. Other components, like your graphics card, can get hot too. But the CPU temperature is usually a good indication of how hot your overall system is.

How Computers Deal With Heat

Of course, computers need a way to deal with this heat, or they wouldn't be able to run for long. The two primary ways that computers dissipate heat are using fans and heat sinks.

Heat sinks are typically made up of metal prongs. They increase the surface area that a CPU (or other component) has with the cool air surrounding it. Instead of all the heat staying above the CPU and overheating it, a heatsink distributes the heat across a wider surface so it can be safely removed. 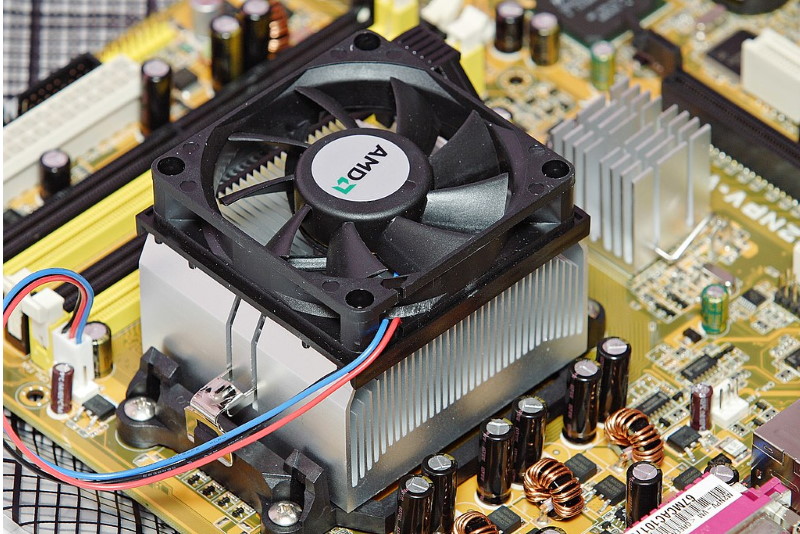 Computer fans are a lot like the fans we use everywhere else. Typically, a CPU fan blows on the CPU's heat sink to keep it cool over time. Most desktop computers have additional fans to help circulate cooler air into the system and remove hot air from the inside.

These aren't the only ways to deal with computer heat, however. Another method is water cooling, which some desktop builders opt to use. This system works similar to a car: heat from the CPU is transferred to a tube containing water, which cycles to a radiator for cooling.  Water cooling is not a common method for computers purchased through big brands like Dell and Lenovo.

Computers can handle some heat, but past a certain point, running your computer too hot could cause shutdowns or even permanent damage.

Windows doesn't have an easy built-in way to monitor your CPU temperature, but you can use the free tool Core Temp to do so. Watch out for the bundled software during installation. 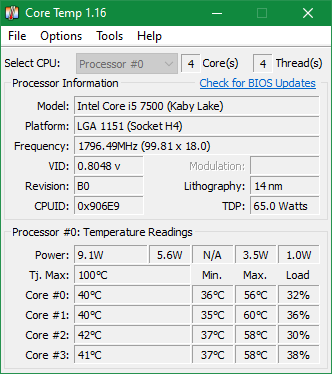 There's no perfect temperature for your CPU, however. A "normal" temperature depends on what you're doing. If you have no programs running, you might see your CPU around 30C. During normal work, it will probably go up to 40-50C, which is fine. And while playing a video game or doing intense video work, it will likely be higher.

You likely only have a problem if your computer runs much hotter than it should for extended periods of time, based on what you're doing.

How to Keep Your PC Cool

Assuming all your computer hardware is working properly, the main problem why your PC might be getting hot is airflow. There are two common ways to improve this.

The first is removing dust from your system. Over time your computer will collect dust that it pulls in from the fans. As this builds up, it can restrict airflow and reduce the efficiency of your cooling systems. This can happen more quickly from pet hair and other pollutants.

If you're able (it's easier on a desktop than a laptop), it's a good idea to open your computer and use canned air, along with a soft cloth, to wipe dust away. Pay particular attention to the fans and heat sinks, which often become caked with dust.

The other element to consider is how much air is able to flow through your PC. On laptops, overheating commonly occurs because the external fan port is blocked. Try to avoid setting your laptop on a blanket or other soft surface, which can block the fans. It's best to use your laptop on a flat surface that doesn't block airflow, such as a wood table.

Now you know why computers generate heat, how they deal with it, and some ways to make sure your PC has adequate airflow. It's normal for your computer to warm up a bit when working hard, but you should be careful that it doesn't run too hot over time.

For more, why not learn the differences between 32-bit and 64-bit CPUs next?