Understanding the Battery Health of Your Devices

The rechargeable batteries inside devices like smartphones, laptops, and tablets are consumable devices. This means that over time, they degrade and don't perform as well as they used to.

But how do you know if your device's battery is healthy, and what information to look for? Let's take a look.

Over time, every battery will hold less of a charge than it did when it was new. For example, a battery inside a laptop you've used for five years won't hold a charge for as long as it did when you bought it. Even when the battery charge shows 100%, that 100% doesn't represent as much stored power as before.

Rechargeable batteries have a capacity, measured in milliampere hours (mAh). The larger the battery's capacity, the longer it can output a charge for. For some examples, the iPhone 12 has a 2,815mAh battery, while the Samsung Galaxy S21 has a 4,000mAh battery.

The capacity alone doesn't mean that your battery will last longer, though. Many factors go into battery usage, like screen brightness, how many processes are running, and similar. A well-optimized phone with a smaller battery could last longer than a device with a larger battery that's too power-hungry.

Battery cycles are another important measurement in battery health. A cycle is one full discharge and recharge operation. Thus, your laptop going from 100% charge to 0% is one cycle.

But battery cycles don't have to happen all at once. If you let your phone discharge to 50%, then charge it fully and let it drop to 50% again, that completes one full discharge cycle. Many device manufacturers state how many charge cycles their batteries are rated for. For example, Apple rates modern MacBooks for 1,000 battery cycles before they're considered to be "consumed".

Why Does Battery Health Matter?

Barring any hardware failure, as long as you take care of your device, the battery is typically the first component on a laptop or phone to run into problems. Thus, knowing the health of your battery can make you aware of when your battery won't run for as long, or even have further problems.

These days, almost no smartphone has a user-replaceable battery. Some laptops do, but others don't allow you to replace the battery on your own. Since manufacturers strive to make modern devices as slim as possible, there's no room to spare for a replaceable battery case.

That means if your battery starts malfunctioning or doesn't hold enough charge for you to get through a day, you'll have to deal with it or pay the manufacturer to replace the battery.

How to Check Battery Health on Your Devices

Let's quickly walk through how to get battery health information on Windows, Mac, Android, and iPhone.

On Windows 10, right-click the Start button and choose Command Prompt or Windows PowerShell. At the resulting window, enter this command:

You'll see a message that a file called battery-report.html was saved to your user folder. Open this up, and you'll see info on your battery under the Installed Batteries section. 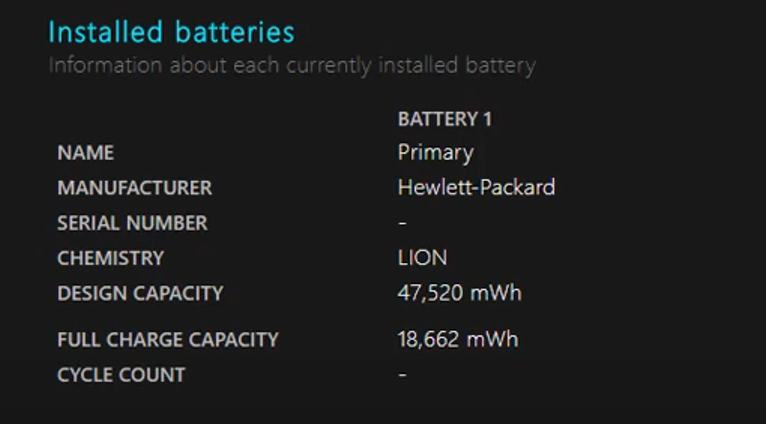 How to Review Battery Health on a MacBook

On a Mac, click the Apple menu at the top-left of your system and choose About This Mac. On the resulting window, click System Report to open a panel with all kinds of info about your computer. Select the Power entry from the left side, which is under Hardware.

There, you'll see the Cycle Count. As mentioned, if this is getting close to 1,000, then your MacBook's battery is nearly worn-out. macOS shows the battery's Condition here too—if it's Normal, then you're clear for the time being. 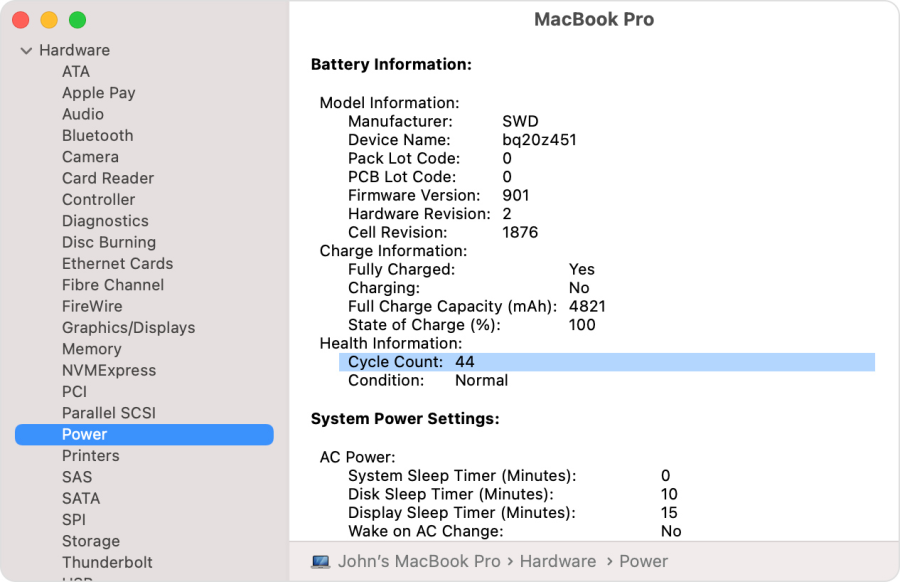 How to See Battery Health on Android

Unfortunately, Android doesn't contain an easy battery health menu like the other platforms. There are two methods that let you review the health of your device battery on Android, though.

This will bring up a menu with several options that show detailed info about your device. If you see an entry titled Battery Information, you can tap this to see your battery health. But this menu doesn't appear on all Android phones.

For another method, install the free AccuBattery app. This is a third-party solution, but it's the best way to monitor your battery's health on Android. The app will walk you through how it works upon opening it.

After it collects some data about your battery usage, the app will tell you how healthy your battery is and give you tips to maximize its performance.

Checking Battery Health on an iPhone

Finally, both the iPhone and iPad have a menu dedicated to reviewing your battery status. Head to Settings > Battery and tap Battery Health to take a look. This will show your Maximum Capacity, which is a percentage of your battery's current maximum charge compared to when it was new. The closer to 100% this is, the better.

If your phone detects any problems with your device's battery, it will include that information here. It's a good idea to keep Optimized Battery Charging enabled to reduce unnecessary charging cycles.

Now you know more about how rechargeable batteries work in today's devices, and how to monitor the battery health in your laptop or phone. You don't need to worry about your batteries all the time, but it's a good idea to know when your battery has heavily degraded so you know what to expect from its performance.

If your battery doesn't last as long as you'd like, learn ways to get more battery life from your smartphone. Buying an external battery pack is useful, if you don't mind carrying a separate unit.